* 1893: [USA] Anthropologist/ethnologist Stewart Culin wrote papers introducing mah-jongg to the English-speaking world (earliest known written mention of the game anywhere, in any language, per MJM). The University of Waterloo in Ontario, Canada, provides the text of some of Culin's work at http://www.gamesmuseum.uwaterloo.ca/Archives/Culin/ .

* 1895: [Great Britain] Sir W. H. Wilkinson wrote an article on Chinese card games (precursors to mah-jongg), speculating that these were the precursors to Tarot cards. Not a lot in this article about mah-jongg specifically -- just one brief mention of a deck of cards he calls ma chioh, "hempen birds." He describes the breakdown of a ma chioh deck, and it's similar to a mah-jongg set but without winds, and with other cards in their place.

* 1909: [Japan] Article "Some Places in Manchuria and Korea" published by Soseki Natsume. I cannot read Japanese, and have no record of what the author wrote other than that he "stated that he saw Chinese people playing mah-jongg" in Shanghai. This is the earliest known Japanese description of mah-jongg confirmed so far, according to the Mahjong Museum in Chiba.

"WorldCat is an Internet resource that is accessible only in large public libraries. It is an inter-library world network, a sort of "meta-catalogue", with an easy access, multilanguage interface (with Chinese, Japanese and Korean) and powerful research tools. A students' version is called FirstSearch. WorldCat gives access to the collections of many North-American and European libraries but also to small specialised collections -- particularly museum libraries -- as well as documentation centres and some public record offices. It is with WorldCat that I found Sir William Henry Wilkinson's interesting "Memorandum" of 1925 with the earliest description of the rules of 'Zhongfa' in 1890 (see my post "Mahjong rules in... 1890" of 4 Dec. 2002)." And on July 29, 2003 Thierry added in another newsgroup post: "I also tried RLG and got it. Interestingly, RLG, another large library network, is free. http://www.rlg.org/toc.html. Its search engine is called Eureka (of course!) and let you search for books and other documents. It is less powerful than WorldCat but you can have it at home."

* May, 1920: [China] Another early Chinese book on mah-jongg: "Keys to Winning at Mah-Jongg and Poker," (or "Secret Method for Mahjong and Poker") by Haishang Laoyouke (a pen name; note that "Haishang" is a play on "Shanghai"), published by Shanghai Shijie Shuju. Click here to see the cover and read what the MJM and Ryo Asami say about this book.

* 1920: [USA] Joseph Park Babcock wrote his simplified "Rules for Mah-Jongg" (usually called "the Red Book"), based on the Chinese Classical rules. This marks the beginning of mah-jongg's introduction to the West. After Babcock, the floodgates were opened, and many many books were written. 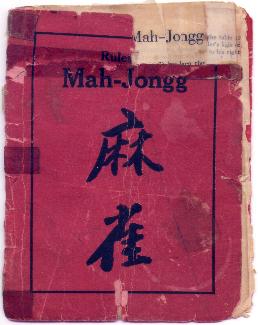 Click here to see pictures and selected scans from classic mah-jongg books of the 1920s!

A MINOR (and somewhat silly) CONTROVERSY: THE CC THEORY

Some of the ideas in this article originated with mah-jongg scholar Michael Stanwick. Props to Mr. Stanwick for his excellent research.